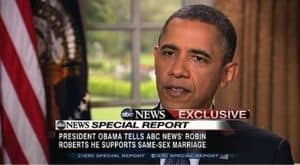 President Obama's decision to file an amicus brief in Hollingsworth v. Perry calling on the Supreme Court to strike down California's Prop 8 has been met with the kind of media coverage and commentary due an historic event. Media outlets are focusing mostly on the historic nature of the brief: A President of the United States is actively supporting the freedom to marry in the courts. Commentators are generally talking about the political impact of the brief: It keeps the President at the vanguard of the gay rights movement while giving some of the Supreme Court's conservative or cautious justices a path that recognizes the right of committed gay couples to marry without doing too much too fast.

As I discussed here last week, the President's brief is a most welcome product of his deeply held personal belief that all Americans are entitled to be treated equally regardless of sexual orientation. It is also a product of the pro-gay political winds of the day — namely, after more than 100 Republicans signed on to a brief in support of striking down Prop 8, a progressive Democratic president that made support for gay equality a central part of his campaign and his inaugural address could not stand on the sidelines. The brief also reflects the President's cautious nature: he helped devise a middle ground position between accepting the freedom to marry in California alone and striking down every state marriage ban with one stroke of the pen. His so-called "8 State Solution" would delegitimize the gay marriage bans in those states that, like California, accord gay persons every possible right — second parent adoption, domestic partnerships, benefits, and so forth — but simply deny them the word "marriage." I wrote about this in more detail here.

The problem is that, when read in the context of the entire brief, the 8 State Solution makes no sense. If the Court takes the President's argument seriously, the justices need not stop at just 8 states. The President's theory could invalidate all marriage discrimination against gays.

AFTER THE JUMP, I bring some complex legal concepts down to earth and argue that President Obama's 8 State Solution is just a political proposal. His purely legal argument would go much further.

The President's brief has two arguments. First, Prop 8, like the Defense of Marriage Act (DOMA) and any other government action that discriminates on the basis of sexual orientation, should get heightened scrutiny. Heightened scrutiny refers to the burden that proponents of discrimination have to carry in order for their law to pass constitutional muster. Think of it like hurdles on a track: the higher the hurdle, the fewer runners are going to make it over; the higher the scrutiny, the fewer laws are going to make it, as well. Second, Prop 8 fails heightened scrutiny because it denies the word "marriage" while leaving in tact California's progressive and otherwise equal family law regime that grants all possible rights (except "marriage") to gay persons.

This argument sounds good, but it simply doesn't logically follow. To see why, consider the hurdling analogy. Say you're a college track coach and you're running a tryout to pick the five best hurdlers. Fifty people show up to compete. If you keep the hurdles absurdly low, almost every runner will be able to pass the easy test while weeding out only the absolutely unqualified. As you raise the hurdle, more and more of the runners in the lower ranks are going to trip, fall, or fail to clear the bar. The same is true for the level of scrutiny: the higher the level of scrutiny, the more and more discriminatory laws are not going to pass the test.

The President is saying that if we accept heightened scrutiny, California's — and presumably, Delaware's, Hawaii's, Illinois's, Nevada's, New Jersey's, Oregon's, and Rhode Island's — bans on same-sex marriage fail. But, denying the word "marriage" while treating gays and their families equally in every other respect is just the most irrational thing a state can do. For example, you cannot, with a straight face, look a judge in the eye and say, "We don't think gays should marry because opposite-sex couples make the optimal parents," while at the same time allowing those very same gays to be parents! Nor can you rationally argue that bans on gay marriage encourage opposite-sex couples to have unplanned pregnancies within marriage when all you're doing is saying that gays cannot have the word "married" on their civil union certificate.

In other words, marriage discrimination in President Obama's 8 states fail constitutional muster under rational basis review — the lowest hurdle, the easiest one for runners to jump over. His argument for heightened scrutiny, if adopted, would help invalidate many more bans on the freedom to marry, if not all of them. The 8 State Solution, therefore, makes no legal sense.

Why would the President make this confusing and illogical argument and force himself into a strange corner of the 8 State Solution when we all know he believes in a general freedom to marry for gay Americans? There are legal and political reasons. 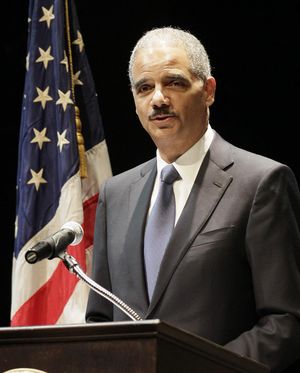 The legal reason is consistency. If you recall, when Attorney General Eric Holder wrote his letter to House Republicans telling them that the Obama Administration will no longer defend DOMA, he stated the President's position that anti-gay discrimination merits heightened scrutiny and that DOMA fails under that standard. As Windsor and the other DOMA cases wound their way through the federal district and appellate courts, the Second Circuit and the Northern District of California adopted heightened scrutiny, making it an increasingly viable legal development. Therefore, when the President filed his brief asking the Court to strike down DOMA, he argued for heightened scrutiny. Prop 8, like DOMA, is an example of state anti-gay discrimination, so it gets heightened scrutiny, as well.

Politics probably played a bigger role in the 8 State Solution. The President is a cautious and highly skilled politician keenly aware of the political winds that affect the Supreme Court. He knows that going too far too fast could not only back fire, but also put off some of the more conservative justices on the Supreme Court who may be supportive of a constitutionally-protected freedom to marry. The 8 State Solution gives the Court a way to strike a victory for equality without feeling like Hollingsworth would be imposing the freedom to marry on states not quite ready. By leaving intact a comprehensive regime that recognizes "everything but marriage," the 8 states implicated by the President's brief are, at a minimum, more ready to adapt to a reality with the freedom to marry. The social impact of a pro-gay decision in Hollingsworth would be less drastic in those states, thus reassuring the Court's conservatives or libertarians.

But let's not lose the forest for the trees. The President's brief will be remembered as one of the several milestones we have recently reached in American gay rights history. He is not only the first President to support our quest for marriage freedom while in office, he is at the vanguard of gay civil rights. That his brief's particular legal argument was probably more a product of politics than precise legal reasoning is almost irrelevant given the brief's larger socio-political objective: to push the judiciary and the population in general to see the justice of the freedom to marry.