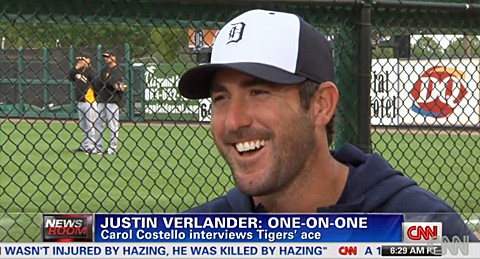 CNN's Carol Costello was at spring training with the Detroit Tigers and sat down with pitcher Justin Verlander, asking him if there are gays in Major League Baseball and whether an openly gay player would be accepted.

Said Verlander: "I'm sure there are [gay players]. I think as with any sport, a gay player would probably be hesitant to come out, but the sheer number says there absolutely is."

Verlander added that a gay player would be welcome in the Tigers' clubhouse:

"Yeah, I don't see why not.  Given the right situation, and a team that's a family atmosphere, and I feel like we have that atmosphere here. I don't think one of our players would be scared to come out. We got 25 guys, it's a family, and our goal is to win a World Series. What your sexual orientation is, I don't see how that affects the ultimate goal of our family."

Costello then asked Verlander why he thinks there is so much controversy about it:

"I think it's a tricky subject because you start getting into locker rooms and walking around nude, or whatever. And I think that would be more of a tricky subject than anything. You know, your life decisions and sexual orientation – like I said, I don't think that plays any effect on what we're trying to do as a team, so I don't see why that would matter."

Added Verlander: "I wouldn't mind it."