A new AP story takes a look at the families of the Supreme Court justices and looks at how their personal lives might affect cases they take on. 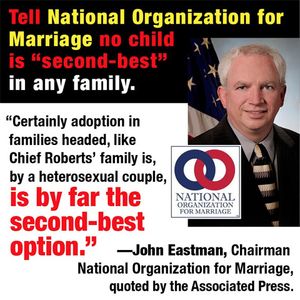 The article notes that Justices John Roberts and Clarence Thomas both have adopted children and contains a particularly offensive quote from NOM Chair John Eastman:

"The diversity of the family lives of the justices mirrors the diversity of American families overall," said Andrew Cherlin, a Johns Hopkins University sociologist who studies families and public policy.

Cherlin, who does not follow the high court especially closely, wondered whether the gay marriage cases might take on a similar dynamic. "If justices consider their own family lives in these cases, it may change the way they rule," he said.

Gay marriage opponents said they are not worried about the votes of Roberts and Thomas.

"You're looking at what is the best course societywide to get you the optimal result in the widest variety of cases. That often is not open to people in individual cases. Certainly adoption in families headed, like Chief Roberts' family is, by a heterosexual couple, is by far the second-best option," said John Eastman, chairman of the National Organization for Marriage. Eastman also teaches law at Chapman University law school in Orange, Calif.

Previous Post: « WSJ: The Popped Collar is Back – VIDEO
Next Post: Marco Rubio at CPAC: Denying Gays the Right to Marry ‘Does Not Make Me a Bigot’ – VIDEO »