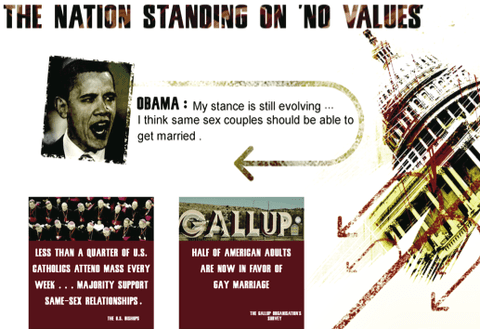 Al Qaeda has been suffering as of late. Though spin-off groups like Al Qaeda in the Arabian Peninsula and Al Qaeda in the Islamic Maghred of Mali are doing alright in their geographic-specific demographics, the core Al Qaeda brand has been diminished in popularity and power in recent years, particularly after the death of their headlining star, Osama bin Laden. If the baddies want to survive, they need some serious rebranding, and as Joe.My.God found, they’re hoping to hitch their wagon to the anti-gay movement’s star.

As their propaganda rag, the incongruously named Inspire magazine, makes clear, Al Qaeda’s firmly against marriage equality, which they cite as just one of the examples of why the West’s destined to fall: The collage of hate comes directly after American citizen-turned-terrorist Adam Gadahn’s open letter celebrating what he calls political, military and economic signs that “the American empire is at an unprecedented stage of weakness and decline.” Marriage equality is simply the icing on the cake, Inspire‘s art director appears to be saying, weakly.

Sorry, Al Qaeda, this is a valiant attempt at making yourself relevant, but ultimately it’s also a stale approach. I mean, seriously, Barney Frank is your villain? At least go with someone more dazzling and therefore threatening to homophobes, like RuPaul or Adam Lambert. Also, doesn’t lamenting the fact that Catholics aren’t attending mass undermine your whole religious domination schtick? This all just so uninspired, Inspire, and unattractive and confusing. If this were Celebrity Apprentice, you would be fired, Al Qaeda editorial team. 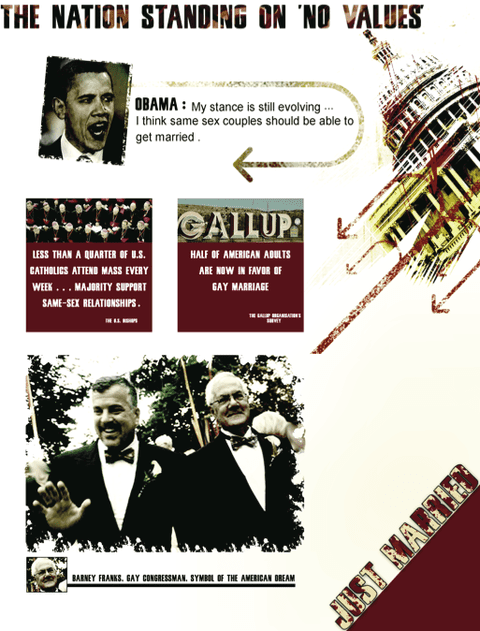