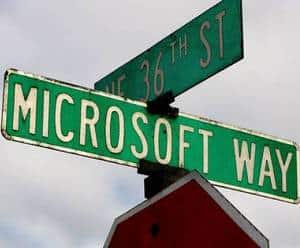 For more than a decade, advertisers and corporate marketers have seen gays and lesbians mostly as consumers, as people with disposable income who could be tapped to boost a company's bottom line.

That said, seeing corporations pay lip service to LGBT rights has become somewhat expected, particularly around pride, when suddenly every company under the sun seems to be embracing their gay pals. So news that over 200 major corporations, including Apple, Nike, Google, Abercrombie & Fitch, Armani and Office Depot, signed Supreme Court amicus briefs opposing DOMA and Proposition 8 may seem normal and predictable. It's neither.

As James B. Stewart at the New York Times notes, this surge is quite the anomaly.

Historians told me there is little, if any, precedent for such early and extensive corporate support of a civil rights issue that remains, in at least many quarters, highly controversial. "By and large, corporations were not leaders but laggards in this process," said Gavin Wright, professor of American economic history at Stanford and author of Sharing the Prize, an economic history of the civil rights movement. "They supported a public accommodations law only after sit-ins and boycotts inflicted heavy losses and it became clear that these pressures were not going to fade away as the latest student fad…." But that changed, he said, "when they found that desegregation actually worked."

Corporations largely steered clear of the Equal Rights Amendment, and played little role decades ago in the early stages of the women's movement. And while many companies have joined in Supreme Court briefs in recent years supporting affirmative action and diversity in the workplace, those moves came long after landmark Supreme Court cases like Bakke in 1978…

By contrast, corporations are weighing in on the gay marriage issue in the first cases to reach the Supreme Court.
…
"I think you’ll find that, historically, most companies have had a policy against taking a stand or filing amicus briefs, and then only if there is a direct business impact," Mr. Willett said. "They don’t want to get involved in social issues. To see this many businesses rallying behind this cause tells you that it’s a real business issue."

Most of the CEOs and executives and management types within these supportive companies frame the matter not as one of emotions, as when politicians cite a gay child — Dick Cheney, for example — but one of hard facts: LGBT people are employees whose happiness and stable home lives help the business grow.  It is, to use one lawyer's phrase, "a business imperative."

LGBT people are no longer just a consumer base to be approached with cold calculation, to be marketed to and manipulated. We're actual people with emotions and loves and passions; we're people with jobs, whose happiness impacts our employers's success; we live down the road or around the bend, just on Main Street. We are, put simply, fellow humans, not faceless shoppers. And in a society where consumption and marketing have an oversized role in shaping our culture, corporate support could very well be just the ticket for discounting homophobia from coast-to-coast.