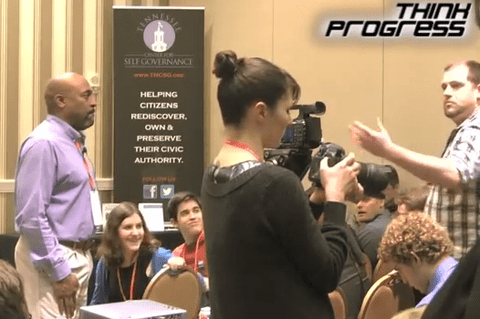 Conservative activist Scott Terry says he fell in love with his white culture while studying literature at an unnamed university. Also, he believes that the federal government is trying to “systematically disenfranchise” white people. These comments came at a CPAC panel called “Trump the Race Card: Are You Sick and Tired of Being Called a Racist and You Know You’re Not One?”, which was dedicated to expanding the Republican Party’s reach within minority communities.

As if that’s not bad enough, Terry went on to say that black slaves should have been grateful for the food and shelter their white captors provided and admonished a woman for questioning his Tea Party credentials. “I didn’t know the legacy of the Republican Party included women correcting men in public,” he reportedly said.

The exchange occurred after an audience member from North Carolina, 30-year-old Scott Terry, asked whether Republicans could endorse races remaining separate but equal. After the presenter, K. Carl Smith of Frederick Douglass Republicans, answered by referencing a letter by Frederick Douglass forgiving his former master, the audience member said “For what? For feeding him and housing him?” Several people in the audience cheered and applauded Terry’s outburst.

After the exchange, Terry muttered under his breath, “why can’t we just have segregation?” noting the Constitution’s protections for freedom of association.
…
ThinkProgress spoke with Terry, who sported a Rick Santorum sticker and attended CPAC with a friend who wore a Confederate Flag-emblazoned t-shirt, about his views after the panel. Terry maintained that white people have been “systematically disenfranchised” by federal legislation.

When asked by ThinkProgress if he’d accept a society where African-Americans were permanently subservient to whites, he said “I’d be fine with that.” He also claimed that African-Americans “should be allowed to vote in Africa,” and that “all the Tea Parties” were concerned with the same racial problems that he was.
At one point, a woman challenged him on the Republican Party’s roots, to which Terry responded, “I didn’t know the legacy of the Republican Party included women correcting men in public.”

Again, just as a reminder: Terry claims to base his outlandishly, shockingly racist politics on his literature degree, a degree given from an unnamed school for the study of unspecified letters. So Terry either attended KKK U, has a severe case of temporal dyslexia or is just a terrible racist, the type against whom the odds are thankfully stacked.

Watch video of Terry’s outburst AFTER THE JUMP…