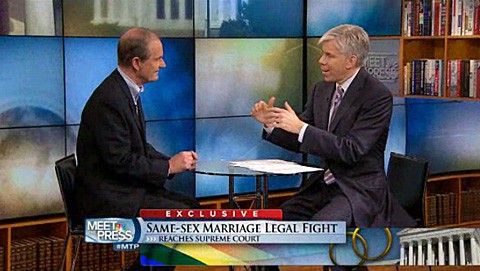 Prop. 8 attorney David Boies sat down with David Gregory on Meet the Press to talk about this week's case at the Supreme Court, emphasizing that the U.S. Constitution protects all Americans, or it doesn't, and he believes the Court will see that it does.

"We believe that even if you simply apply the rational basis test, there is no rational basis to justify this ban. And that's because…there is no evidence. None. That allowing gay and lesbians to marry harms the institution of marriage or harms anyone else…The evidence is that having a loving couple that are married is great for children. Everybody agreed with that. But the evidence is that's true whether it's a gay couple or a straight couple. And it's true whether it's an adopted couple or a biological couple."

Gregory also pointed out all the states that currently have bans on same-sex marriage and asked, 'arent' you effectively asking the Court to say, with one stroke of the pen, we're going to invalidate what those states have done?"

Replied Boies: "Everytime the Supreme Court makes a constitutional decision it's making a decision that certain fundamental rights are too important to be left to the ballot box." 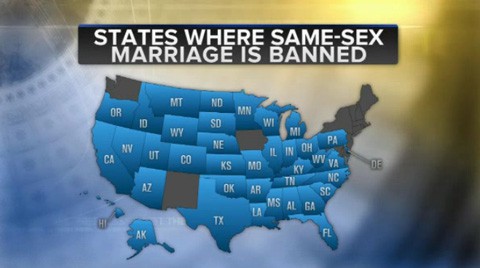 Previous Post: « Evan Wolfson Schools Tony Perkins on ‘Face the Nation’: ‘Gay People are not Going to Use Up the Marriage Licenses’ — VIDEO
Next Post: Protesters Riot with Police as Hundreds of Thousands March Against Gay Marriage in Paris: VIDEOS »