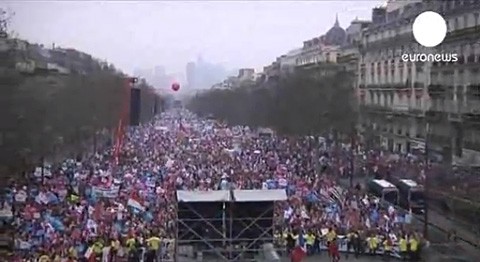 A massive demonstration to stop the legalization of same-sex marriage brought out thousands of conservatives to the streets of Paris today.

Watch videos of the clashes and a report from Euronews, AFTER THE JUMP…

Hundreds of thousands of people – conservative activists, children, retirees, priests – many bussed in from the French provinces – converged on the capital on Sunday in a last-ditch bid to stop the bill.

The lower house of France's parliament approved the "marriage for everyone" bill last month with a large majority, and it now faces a vote in the Senate next month. Both houses are dominated by President François Hollande's Socialist party and its allies. Sustained protests led by opposition conservatives in this traditionally Catholic country have eroded support for the draft law in recent months, and organisers hope Sunday's march will weigh on the Senate debate.

The first few hours of the protest were peaceful. But as it was meant to be winding down, about 100 youths tried to push past police barricades on to the Champs-Elysées. In an indication of the sensitivity of the issue, protesters had been barred from marching on the avenue that cuts through central Paris and draws throngs of tourists daily..

The crowd was estimated at 300,000 people, though organizers said it was 1.2 million.

Tears gas was used on a number of rioting protesters, The Local reports:

100 to 200 frustrated protestors had reportedly attempted to breach a police barricade blocking them from entering the Champs Elysees. In response, riot police forcibly pushed them back from the fences, as well as spraying them with tear gas.

Jean-François Copé, leader of the centre-right opposition UMP party, who was present at the protest, called for President Hollande to be "held to account", and expressed his "indignation" that tear gas had been deployed "against families present with their children."

Watch videos of the clashes and a report from Euronews, AFTER THE JUMP… 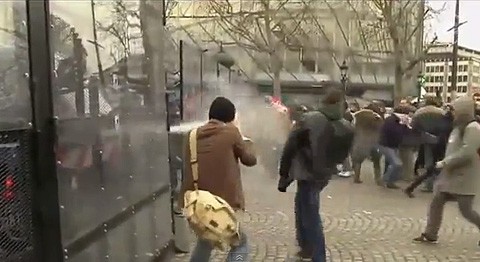 Previous Post: « Prop. 8 Attorney David Boies Lays Out Supreme Court Case on ‘Meet the Press’ VIDEO
Next Post: Rand Paul: I Don’t Mind if the Federal Government is ‘Neutral’ on the Issue of Gay Marriage – VIDEO »