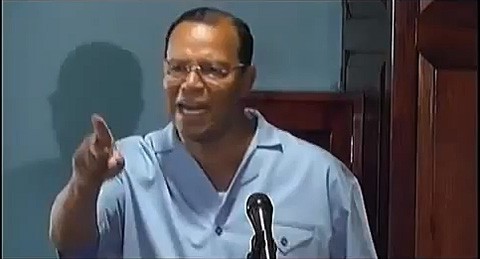 Ripped Farrakhan in a speech on Plus TV:

"How many of you see same-sex marriage and are falling for the pressure that's being put on government to sanction something that God don't sanction. America is attaching aid to you rewriting your constitution, rewriting your laws and because you become a whore for money and forsaken the principles and yet you put your hand on the Bible when you take your oath of office. For what?"

Let's be clear here: Although local LGBT advocates would like their relationships to be legally recognized, same sex marriage is not at play when the Belize Supreme Court takes up the issue of the sodomy laws in May. He also falsely alleges that aid from the United States will be cut unless laws are changed to accommodate gays and lesbians.

What Farrakhan is doing is urging legislators to keep a law that punishes and jails gay Belize citizens for who they are. Nothing less, nothing more.