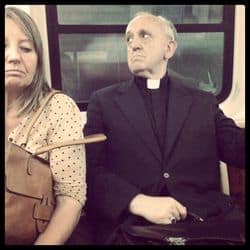 Like many people, New York Times columnist Frank Bruni sees the ascension of Jorge Mario Bergoglio from simply Argentine cardinal to Pope Francis as a time for the church to transition as well. The church has become too mired in sexual policing, something of which Francis too is guilty, and that mission derailed the church by shining the light on its own misconduct.

To get back on track, Bruni says, the church must first ignore Salt 'N' Pepa and stop talking about sex.

It's time for the church to stop talking so much about sex. It's the perfect time, in fact.

It's on matters of sexual morality that the church has lost much of its authority. And it's on matters of sexual morality that it largely wastes its breath. By insisting on mandatory celibacy for a priesthood winnowed and sometimes warped by that, by opposing the use of contraceptives for birth control, by casting judgment on homosexuals and by decrying divorce while running something of an annulment mill, the church's leaders have enraged and alienated Catholics whose common sense and whose experience of the real world tell them that none of that is wise, kind or necessary.

The church's leaders have also set themselves up to be dismissed as hypocrites, unable to uphold the very virtues they promulgate.

If Francis lives up to his reputation and truly embodies the spirit of the saint after which he's named, a humble servant of the poor, he must start rebuilding the church's outreach to the world's least fortunate, the 1.3 billion people living in poverty. That number, Bruni points out, is more than the 1.2 billion of people who identify as Catholic.