The march toward marriage equality has begun in Nevada, the Las Vegas Sun reports: 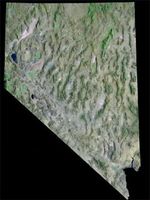 Sen. Tick Segerblom, D-Las Vegas, introduced a Senate Joint Resolution that would repeal the section of Nevada’s constitution that says “only a marriage between a male and female person shall be recognized.”

The repeal would start the lengthy process by which Nevada could legalize same-sex marriage. The resolution needs to pass by majority vote in the Legislature this year and again in 2015 before it would be placed on the 2016 ballot. If the majority of voters in Nevada decide to repeal the marriage definition, then the Legislature could act in 2017 to legalize same-sex marriage in statute.

Vanessa Spinaloza, lobbyist for the ACLU, worked with Segerblom on the resolution and said she’s confident that a majority of legislators support the repeal.

Previous Post: « Snooki and JWoww Will ‘Kill’ the Supreme Court if They Don’t Strike Down Prop 8 and DOMA: VIDEO
Next Post: Towleroad Talking Points: Marriage Equality in New Mexico? »