Andres Duque at Blabbeando reports on a landmark freedom of expression ruling from the First Chamber of the Mexican Supreme Court of Justice, which ruled yesterday in a 3-2 decision that homophobic expressions such as "maricones" or "puñal" are offensive, discriminatory, and not protected. 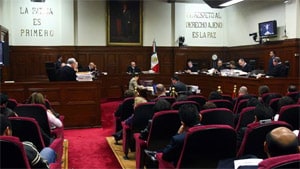 In this sense, the First Chamber determined that homophobic expressions or – in other words the frequent allegations that homosexuality is not a valid option but an inferior condition – constitute discriminatory statements even if they are expressed jokingly, since they can be used to encourage, promote and justify intolerance against gays.

For this reason, the Chamber determined that the terms used in this specific case – made up of the words "maricones" and "puñal" – were offensive. These are expressions which are certainly deeply rooted in the language of Mexican society but the truth is that the practices of a majority of participants of a society cannot trump violations of basic rights.

In addition, the First Chamber determined that these expressions were irrelevant since their usage was not needed in resolving the dispute taking place as related to the mutual criticism between two journalists from Puebla. Therefore it was determined that the expressions "maricones" and "puñal", just as they were used in this specific case, were not protected by the Constitution.

It should be noted that the First Chamber does not hold that certain expressions which could be taken as having homophobic intent in abstract can never be validly used in scientific research or in artistic works. That does not, in itself, imply employing hate speech.