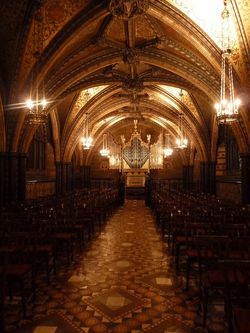 Though marriage equality will most likely be passed very soon in England, the proposed law includes a loophole prohibiting religious bodies like the Church of England from performing same-sex nuptials, meaning same-sex couples won’t be able to get married in their chosen places of worship by men or women of their preferred cloth. This includes chapel of St. Mary Undercroft, or Westminster Chapel, the small chapel nestled beneath Parliament.

A number of MPs are now hoping to change all that by converting the chapel from a strictly Anglican space to a non-denominational interfaith chamber. The Telegraph has more:

The plans to open the chapel to worshipers of all faiths are being considered by senior parliamentary officials together with Helen Grant, the equalities minister.
The scheme was first proposed by Chris Bryant, the Labour MP and a vocal supporter of the Government’s plans to legalize same-sex marriage, in a debate on the legislation.
…
Mr Bryant, a former Anglican vicar, said the chapel was already being used to hold Catholic masses, adding that it seemed “odd” not to formally open it to worshipers from other religions and Christian denominations, including those who will conduct same sex marriage.

He added: “St Mary Undercroft has been many things in its time. It was the Speaker’s dining room and before that Cromwell used it to stable his horses.

“It is a bit odd that we have no place for people of other faiths to worship. If we have got over this hurdle with Catholic masses being celebrated there it seems odd not to allow services of other denominations to be held there.”

And, again, if it was good enough for Oliver Cromwell’s horses…