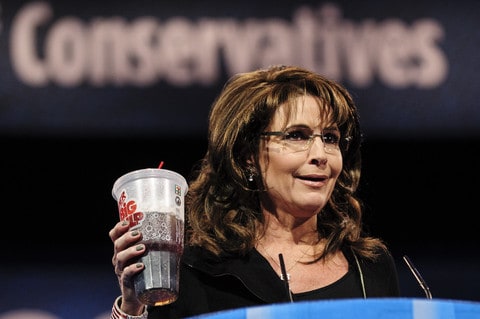 Here, (largely) without comment, are remarks from two different though ideologically related people, Wayne LaPierre, the leader of the NRA who wants armed guards in America’s schools, and Sarah Palin, the failed vice-presidential candidate and former Fox News lackey who likes shooting unarmed wolves from helicopters. The remarks were made one day apart at CPAC, the conservative conference wrapping up its final sessions this afternoon.

First, LaPierre’s one-liner from his appearance yesterday: “The one thing a violent rapist deserves to face is a good woman with a gun.” Counter violence with more violence, he says.

And from Palin, a bawdy, tacky comment about her and her husband, “He’s got the rifle, I’ve got the rack.” She then sucked on a Big Gulp because “Bloomberg isn’t around.”

Watch video of Palin’s “rack” comment and footage of LaPierre’s entire speech AFTER THE JUMP.