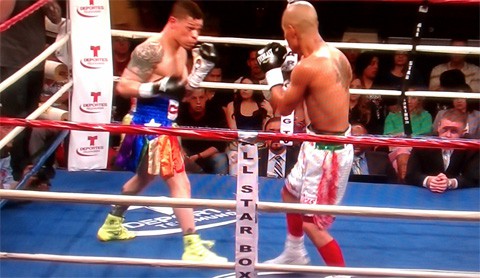 Professional boxer Orlando Cruz, who came out of the closet last October, last night won his second match since coming out against Aaron "The Bomber" Martinez in a 6th round TKO, and did so in a rainbow kilt, Blabbeando reports:

He dedicated the fight to a number of people including his trainers and he almost couldn't contain his emotions as he thanked his grandmother who passed away last year. He also thanked the LGBT community for their support. During the fight he wore a multicolor boxing kilt with Puerto Rican flags on both sides. One of the flags was red, white and blue, the other flag's stripes reflected the color of the rainbow as a sign of gay pride.