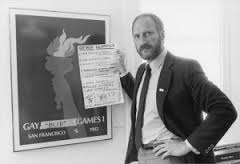 Walesa, who won the Nobel Peace Prize in 1983 after co-founding the Solidarity independent trade union movement in Poland, made controversial comments in a TV interview on March 1, saying gay people should not be allowed to hold prominent political posts.

Kim, whose district includes Lech Walesa Street, said she is considering renaming the street after Tom Waddell, a gay activist, or reverting back to the alleyway's previous name of Ivy Street. The Tom Waddell Health Center, which includes a transgender clinic, is located on Lech Walesa Street. Waddell worked at the clinic and also created the Gay Olympics, later renamed the Gay Games, Kim said.

Kim says she will do LGBT outreach on the issue and make her decision.