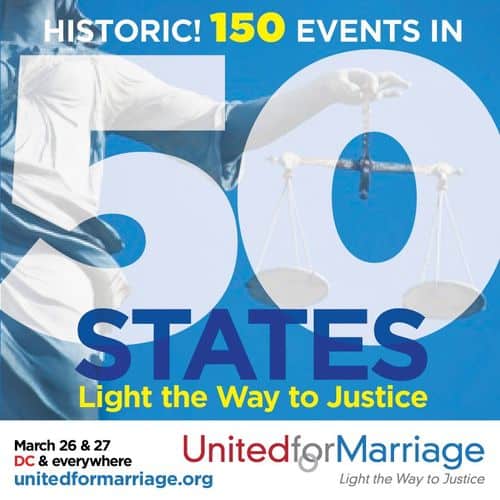 No matter where you are in the country on March 26 and 27, there is likely a rally or event to mark the Supreme Court's historic hearings on DOMA and Proposition 8.

Find or create an event of your own on the United for Marriage 'Light the Way to Justice' page. You can also follow them on Facebook or Twitter.

For New Yorkers, there is a march this weekend, on Sunday March 24 starting at 1 pm:

On Sunday, March 24, marriage equality supporters will march from the historic Stonewall Inn to Washington Square Park to express support and solidarity with those who fight for marriage equality across the country, and especially before the Supreme Court. At Washington Square Park, supporters will rally for freedom for everyone—including our gay and lesbian family members, friends, co-workers, and neighbors. The rally will feature flag dancers, singers, and speeches.

Previous Post: « NJ Teen Who Came Out at School Assembly Begs Lawmakers to Ban Harmful ‘Ex-Gay’ Therapy: VIDEO
Next Post: Snooki and JWoww Will ‘Kill’ the Supreme Court if They Don’t Strike Down Prop 8 and DOMA: VIDEO »