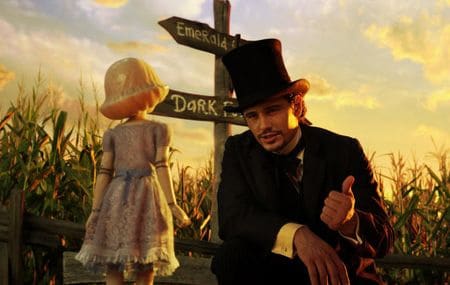 The ladies love their wizard (James Franco) in Oz: The Great and Powerful

You're basically asking for a trouble with that title, you know? OZ: THE GREAT AND POWERFUL. It doesn't take a crystal ball to predict how this will turn out. If the movie is neither great nor powerful, tomatoes will be thrown. It feels weird to abbreviate the new picture as simply Oz, since it's a derivation rather than an original, so we'll call it Great and Powerful moving forward despite the misdirection. The filmmakers would approve since the movie begins with a clear and charming admission that James Franco's "Oscar Diggs" is no wizard at all but a travelling con-artist. So I come not to throw tomatoes (too easy), at least not at first, but to marvel at how red they are as they fly through the air.

The trailer brags that the movie comes from the producers of Tim Burton's Eyesore in Wonderland, a gargantuan box office success but one of the worst films of the new century, so there was cause to worry. Could any film be as simultaneously garish and muddy to look at? The happy answer is no.3D technology has come a long way and director Sam Raimi (most famous for the Spider-Man and Evil Dead trilogies) has far more taste and control of his color palette than Burton has had recently. A

fter the movie's old fashioned title sequence and Kansas-set prologue, introducing us to Franco's womanizing wizard before he's whisked off to Oz (you know how), every color of the rainbow does make an appearance. They often share the frame but rather than a muddy color assault, the rainbow here behaves like a joyous community, intermingling peacefully and taking turns in the spotlight. In some small ways it's a worthy tribute to the joys of Golden Age Technicolor. That's especially true when the eye-popping color meets a great visual idea like the Wicked Witch's fiery silhouette (shadow play being a favorite tactic of Raimi's) or a terrific climactic image like the Wizard's pompous arrival in the Emerald City via clouds of colored smoke and cinematic projection.

So, points for visual prowess but visual prowess ages rapidly in cinema. People don't still watch The Wizard of Oz seventy-four years later because the effects look cutting edge. They watch it for Judy Garland and those adorable Friends of Dorothy.

The character work in Great and Powerful is hit and miss. After sleepwalking through his Oscar-hosting gig and Rise of the Planet of the Apes, James Franco is suddenly awake again, an irony of sorts since Oz is a dreamland. In the absence of tin men, cowardly lions, and scarecrows we get a flying monkey and a china doll as companions to the hero and while they're cute they won't become iconic companions. The movie has the most trouble, though, with its three witches: Michelle Wiliams cuts a hypnotic figure as "Glinda the Good" but the movie doesn't give her any opportunity to flesh out the character and strangely there's not a hint of the prissy humor that defined the character in both Billie Burke and Kristin Chenoweth's takes so she doesn't always feel like Glinda per se; Rachel Weisz has the least to do as "Evanora" but she's good with a line reading; But Mila Kunis is, I'm sad to say, an absolute disaster as her sister "Theodora." Some actors understand style and the heightened qualities of genre acting but Kunis is utterly lost which handicaps the movie considerably.

But the most disappointing thing about Great and Powerful which is a bit better than it ought to be thanks to Sam Raimi's visual giddiness, is that there's just not much to talk about that isn't in some way a paraphrase of "So… how about that the immortal 1939 musical!?!"  So why fight it…

My absolute favorite soundbyte from The Wizard of Oz (and the competition is stiff) though not my favorite shot is when Dorothy Gale discovers the Tin Man, feet first. The camera pans up with Dorothy's eye from legs to crotch to torso to face.  "Why, it's a man!"

Look I'm not above a good cat fight. There's almost nothing funnier in The Wizard of Oz than Glinda's helium-voiced Queen Bee dismissals of the Wicked Witch ("only bad witches are ugly"). In fact, the original cattiness enabled a whole modern wave of sympathy for the devil (i.e. The Wicked Witch of the West) in rethinks like "Wicked" and Great and Powerful that wondered how she got that way. But at its heart the 1939 classic was a heroine's journey that spun on the bravery and kindness of a young girl testing her strength and resolve in a frightening world.

Though the three witches in Oz are all quite powerful, they are rendered powerless when a man enters the equation. Even a man who admits he is without power. It's not really about about who sits on the Emerald City's throne but who sits beside the man who will sit there. The plot spins not on transporting tornadoes but on the con-artist's seductive charms and HOW CRAZY WOMEN GET IF A MAN DOESN'T LOVE THEM! 'Someday their Prince/Wizard will come' being the takeaway. If you're really going to Follow the Mighty Dick Road at least have a little camp fun with your ode to the patriachy ! Great and Powerful hedges its bets here by taking it too seriously and extending an olive branch to the Wicked Witch because it's not her fault she's so crazy. James Franco, you see, is just too irresistible in Sepia or Technicolor.

P.S. If you'd rather just skip the new movie and just think about The Wizard of Oz again, here's a fun breakdown from Vulture about what the 1939 film is really about and a "best shot" party I hosted, wherein bloggers praised their personal favorite images from the film.