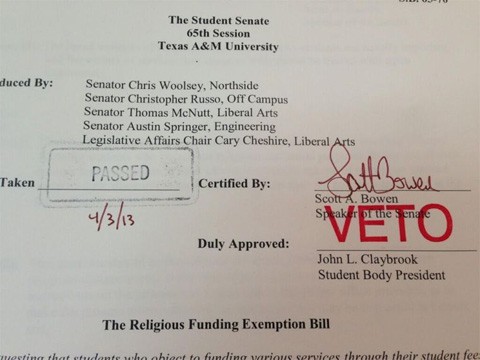 Texas A&M student body president John Claybrook has vetoed a measure we reported on yesterday that would allow students to opt out of funding the campus GLBT Resource Center if they have religious objections.

News this week that some student senators had targeted the center thrust the traditionally conservative university into the national spotlight, and Claybrook said it was time to "stop the bleeding."

“The damage must stop today,” Claybrook wrote in a letter announcing the veto. “Texas A&M students represent our core value of respect exceptionally and I'm very proud of the family at this university. Now, more than ever, is the time to show great resolve and come together, treating each other like the family that we are.”

Claybrook's veto means that the legislation passed 35-28 on Wednesday will not represent the official opinion of the student body at Texas A&M.

The student senate may attempt to override the veto on April 17 when it meets again, though it's unclear if it plans to do so.