Senator Mary Landrieu (D-LA), one of the four senate Democrats yet to back marriage equality, told CNN that she personally believes in it but won't take an official position because Louisiana has laws against gay unions: 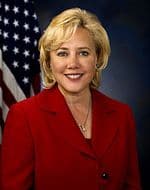 Landrieu told CNN National Political Correspondent Jim Acosta in an interview Friday that she personally believes "people should love who they love and marry who they want to marry," but that her obligation rests with the people of Louisiana who elected her.

"My state has a very strong constitutional amendment not only against gay marriage but against gay partnerships. So I'm looking at the people of Louisiana trying to represent their interests," she said.

The other Democrats besides Landrieu who have yet to evolve are Tim Johnson (D-SD),  Joe Manchin (D-WV), and Mark Pryor, (D-AR).