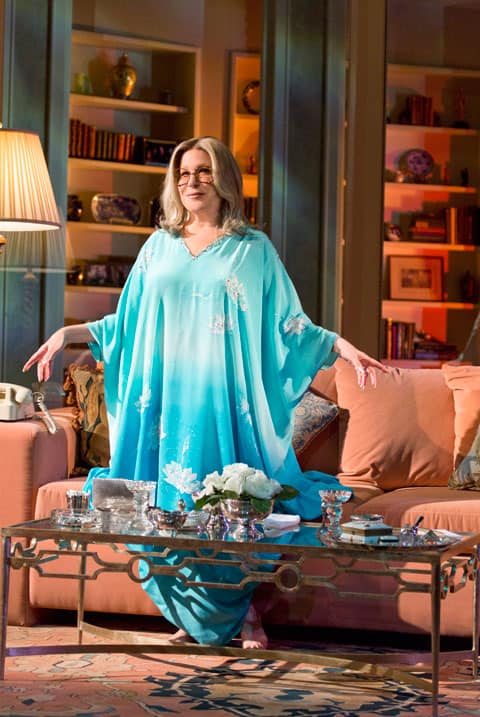 One Hollywood legend is playing another on Broadway, and
there’s a good chance you’ve only heard of one of them. But by the end of I’ll Eat You Last: A Chat With Sue Mengers,
which opened on Wednesday at the Booth Theatre, everyone walks away feeling
like old friends. 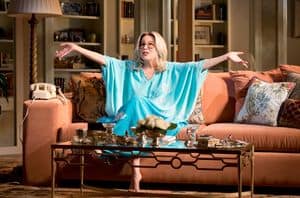 That includes Bette Midler, and every guest welcomed into the
Beverly Hills mansion of Hollywood super agent Sue Mengers for this aptly
titled and utterly delightful ‘chat.’ Written by John Logan, an Oscar-nominated
screenwriter (Hugo, The Aviator) and
Tony-winning playwright (Red), the
show offers a delicious insider glimpse into the seedy yet glamorous world of the
Hollywood talent business.

Sue Mengers, whose career spanned nearly thirty years
beginning in the 1960s, wasn’t just any agent. She discovered Barbra Streisand
singing in a gay bar, landed Gene Hackman in The French Connection, represented Sidney Lumet, Mike Nichols and
Bob Fosse. But loyalty is not a well-known virtue in this business—as the show
begins, Sue is expecting a call from Barbra to fire her. 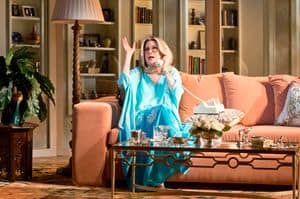 In the meantime, she spends the evening doing what she loves
best: dishing, smoking (tobacco and otherwise), and picking up the occasional phone
call from an A-list star. Ms. Midler proves her rightful place in the latter
category with her gleefully engaging performance, delivered entirely from the
comfort of her plush sofa. Why stand? We’re all friends here.

Under Joe Mantello’s fine direction, Sue’s stories take on a
happy rhythm, punctuated with often-riotous punch lines. An opening example:
regarding a certain legendary guest expected at her dinner party later in the
evening, “Elton’s the easiest dinner guest ever: he’ll eat anything but pussy.” 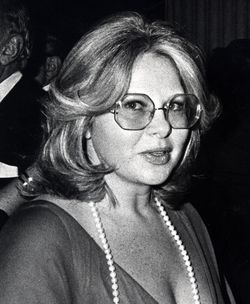 Through the course of a tight 85 minutes, Sue delivers
everything from behind-the-scenes gossip, straight-shot industry wisdom, and
enough of the soft side beneath her brassy surface to bring us firmly on her
side. Like any animated conversation (one-sided though this one may be), Logan’s
script is built on non-sequiturs that nevertheless flow together naturally.
Good agents can talk to anyone, and Sue’s certainly no exception.

From gathering courage to approach the most popular girl on
the playground to a profession in schmoozing, through-lines from Sue’s
formative experiences are simply drawn. But Logan’s economy with storytelling
serves the play and its star well, who keeps her captive audience rapt with
interest.

If we find Sue in the twilight of her career (Logan’s play
is set in the early 80s, Sue died in 2011), her years have made her
wise, though she’s no less passionate about show business. She loves the game
with every fiber of her being (including her diaphanous kaftan), even as the
game keeps changing and she loses her footing.

When she finally does stand to conclude our chat (spoiler
alert), the feeling is pretty near momentous.