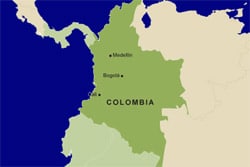 The bill was rejected by 51 out of 102 lawmakers in the Senate – with 17 in favor. The negative vote was widely expected, given that lawmakers from the ruling coalition had made an alliance to oppose the initiative.

Several hundred people rallied in Bogota's main colonial square as lawmakers debated the proposal to allow people of the same sex to marry. Colombians for and against the bill faced off in the Plaza Bolivar, with some critics of same-sex marriage waving banners that read: "1 man + 1 woman = marriage."

Colombia's Supreme Court issued a ruling in 2011 that requires the Congress to act on marriage equality by June 20, 2013, or else gay couples can apply for civil unions from notaries.