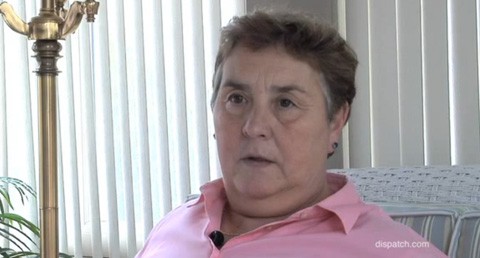 Disgusting actions from Bishop Watterson, a Catholic High School in Clintonville, Ohio, have students and other supporters rallying around Carla Hale, a physical education teacher who was fired by the school after an anonymous parent informed them that her partner's name had appeared in her mother's obituary. 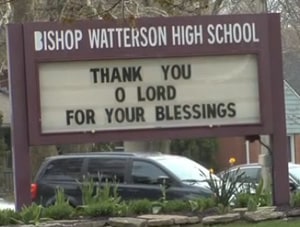 Watch Hale tell her story, AFTER THE JUMP…

According to a contract between the Columbus diocese and the Central Ohio Association of Catholic Educators, teachers can be terminated for “immorality” or “serious unethical conduct.” George Jones, a spokesman for the diocese, had no comment yesterday, saying personnel matters are confidential.

Hale, a physical-education teacher who taught at Watterson for 19 years, said she has filed a grievance under the terms of the contract, seeking her job back. Her attorney, Thomas Tootle, said they are exploring other legal options.

Hale, a practicing Methodist, said she also hopes the reaction to her dismissal spurs Catholic leaders to reconsider their stance on gay relationships.

Hale did not discuss her sexual orientation or her partner with students or teachers. A Change.org petitionto reinstate her now has more than 10,000 signatures.

The Dispatch adds that Hale's firing may violate city law:

Students have left testimonies in support of Hale.

When I was a student at Bishop Watterson, we were always taught to treat others with dignity and compassion. As an alumni, I still credit Bishop Watterson with shaping me into the person I am today — both morally and ethically. I am deeply saddened to learn that, in spite of what Watterson taught me about respect for all humanity, a longstanding and well-respected faculty member was treated so unfairly. Ms. Hale has always been an excellent coach and teacher. Her sexual orientation and lifestyle choices have no bearing on her capacity to educate her students and should NOT be grounds for termination of employment.

Bishop Watterson demands that we all treat each other with equality and respect. I hope they see that their students are standing up for the morally right thing, not to just rebel against the school. Carla Hale is a child of God and equal in his eyes to all of us. Bishop Watterson needs to recognize that.

Watch Hale tell her story, AFTER THE JUMP…