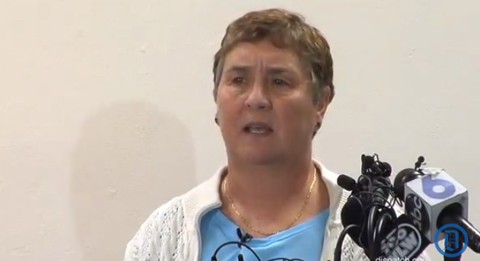 Carla Hale, the Catholic high school teacher in Columbus, Ohio who was fired after an anonymous parent informed them that her partner's name had appeared in her mother's obituary, plans to fight for her reinstatement, she told reporters at a news conference yesterday.

Hale has filed a grievance and plans to appeal to the union that represents Catholic teachers in central Ohio after Watterson Principal Marian Hutson denied her initial request on Tuesday.

“I was informed that I was not terminated because I was gay, but … the spousal relationship that was publicized in the newspaper, which happened to be an obituary, is against church teaching,” she said. Her attorney, Thomas Tootle, said he sees little distinction between the two.

Hale also will file a complaint with the Columbus Community Relations Commission under a city ordinance that makes it a crime for employers to discriminate based on sexual orientation. Mayor Michael B. Coleman is among those who have publicly supported the teacher.

Watch her press conference, AFTER THE JUMP…