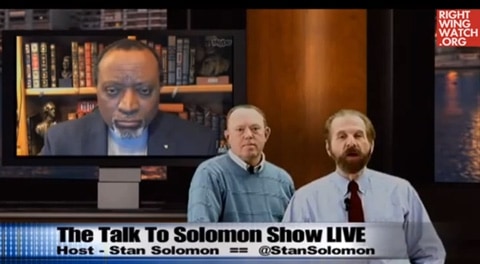 Conservative activist Alan Keyes skyped in to the right-wing Stan Solomon Show to offer his verdict on the recent surge in support for marriage equality, digesting Solomon's ("I can’t stand the thought, the idea, the concept of homosexuality") vitriol, and adding some of his own, Right Wing Watch reports:

“If you go down a road that satisfies your personal predilections and relationships and sacrifices the common good of the country, including the elementary institution by which civilization is sustained, then you’re not only derelict in your public duty, you are abandoning your obligation as a human being…Frankly, people throw around words like ‘crime against humanity,’ I think that kind of disregard for the God-endowed natural rights of human being is the archetype of all crimes against humanity, and I think we have an entire elite faction that is now committed to committing such a crime against the American people.”