Tennis legend Martina Navratilova, who helped pave the way for Jason Collins' coming out with her own years ago, praised Jason Collins in a Sports Illustrated column today. 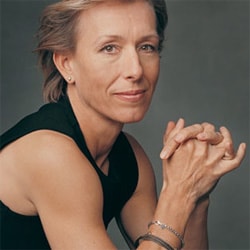 She says, humbly, that although she had less support and lost endorsements it was easier in a way:

When I came out, in 1981, I didn't have much public support and I know I lost endorsements. But I never had to worry about losing my job. In tennis, there are no bosses, no general managers and no coaches who can keep players from competing. So I was safe in that regard. For team sports athletes, this is not the case. A homophobic coach at any level — high school, college or pros — could keep a player from playing.

And she makes note of what it will mean for gay kids:

Now that Jason Collins has come out, he is the proverbial "game-changer." One of the last bastions of homophobia has been challenged. How many LGBT kids, once closeted, are now more likely to pursue a team sport and won't be scared away by a straight culture?

I am thrilled @JasonCollins34 was able to come out on his own terms and, as he put it, is ready to continue the conversation. This is a day of celebration for the LGBT community and for all of us. I look forward to the day when the news of anyone coming out, is a non-issue and once we reach that point we will know we have arrived.

Previous Post: « President Obama Called Jason Collins, Praised Him for Courage
Next Post: Illinois Governor Optimistic Marriage Equality is ‘Within Striking Distance’ with Vote by End of May »