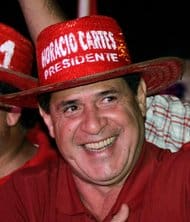 Paraguay's new president Horacios Cartes, who in the days before the election said he'd shoot himself in the balls if his son was gay, called support of same-sex marriage the same as believing in the end of the world, and compared gay people to monkeys, apologized for thos comments on Monday, the AP reports:

Cartes also referred to anti-gay comments he had made, saying: "I have no shame in apologizing to those who felt offended for an expression of mine with respect to same-sex marriage."

During the campaign, Cartes said marriage should only be between a man and a woman.

"Everyone should live within the rules. If not, we'd be like the monkeys that swing in the trees," he said.