Last week I reported that Mariela Castro, the Cuban gay rights activist and daughter of President Raul Castro was being denied a visa to travel to Philadelphia's Equality Forum to pick up an award. 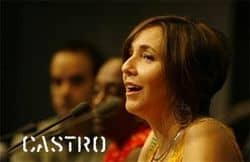 They have reconsidered, CNN reports:

Initially not expected to receive a visa, the official said the case was "looked at again" and "the restriction on her visa has been lifted, which will allow her to travel" to the event on lesbian, gay, bisexual and transgender issues…Contacted by CNN on Monday, the organizers said they had not received official confirmation that Mariela Castro would attend. She is scheduled to take part in a panel discussion on May 4 and to receive an award from the Equality Forum as an "International Ally for LGBT Equality."