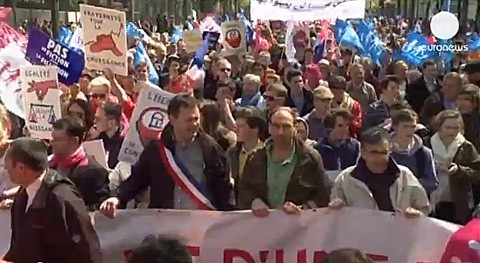 Anti-gay protesters crowded the streets of Paris today ahead of a French parliament vote on Tuesday in which it is expected to adopt marriage equality, Deutsche Welle reports:

Protest organizers said between 30,000 and 50,000 people took part in the demonstration in the Montparnasse area of Paris on Sunday. A rival protest in support of the legislation was also held on Sunday but gathered fewer participants.

Two thousand security officers were on hand to ensure the throngs remained peaceful after demonstrations earlier in the week led to a bit of violence.

Protests were held three nights running, from Wednesday to Friday, and some of the hard-core opponents clashed with police. More than 100 arrests were made throughout the week.

Watch a Euronews report, AFTER THE JUMP…

In a series of guerrilla actions, activists opposed to the bill have staged dawn protests outside ministers’ homes, vandalised cars, assaulted journalists and even blocked a fast train carrying a prominent gay marriage campaigner. One Socialist MP received death threats, and there are reports that two attacks on gay bars, one in Bordeaux and the other in Lille, were linked to rising anti-gay sentiment fed by the protests. So why the explosive outrage in the land of liberty, fraternity and equality?

Some argue that it is simply part of a wider backlash against what is seen as a corrupt, incompetent political class, prompted by Mr Hollande’s inability to tackle unemployment and the discovery that the government’s tax tsar had a secret Swiss bank account.

But the French Right has seized on the gay marriage issue to rally its demoralised electorate. Given the mess that Mr Hollande’s Socialist administration is making of the economy, Right wingers argue, the Left has no right to legislate on moral issues as well.