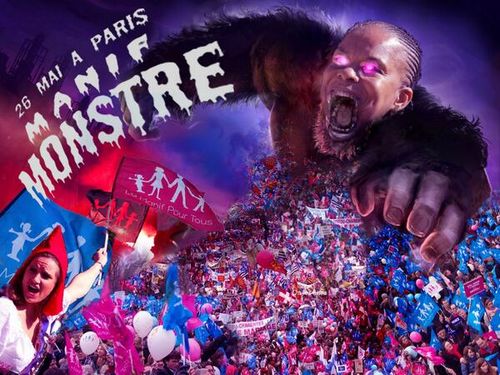 French Justice Minister Christiane Taubira, the main sponsor of France's marriage equality bill, has been the main target of the anti-gay Manif Pour Tous activists over the past months. But they have inspired outrage and anger with a viral image posted to Twitter this week, which depicted the French-Guiana-born official as a gorilla, Euronews reports:

The picture, posted on Monday night, was retweeted and commented massively by anti-gay rights activists and by both outraged anti- and pro-same sex marriage activists.

Among the reactions, one user notes “[The anti-same sex marriage crowd] go from presumed homophobes to proven racists.” One same-sex marriage opponent tweeted: “You are completely discrediting the Manif Pour Tous with this horrible image!” Defenders of the poster said it was supposed to be humoristic and ironic and that the monster refers to a “monument of American cinema, the devastating [King Kong]” and the “destruction” the bill will bring to the families.

On Tuesday morning, the owner of the Twitter account where the picture was initially posted deleted it, before explaining: “I confirm that I acted on my own, without racist intention. Sorry if it has hurt. I withdraw the picture but it is a misunderstanding. I used an already existing monster picture.” To make further amends, he then retweeted a message from an official anti-same-sex marriage organisation stating “The only poster for the May 26 demo is this one.”