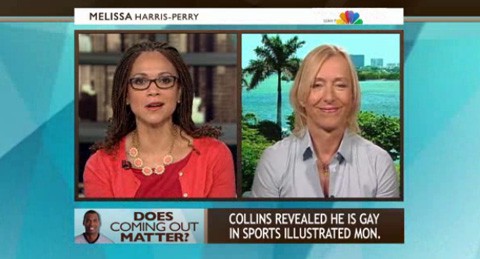 Martina Navratilova appeared on Melissa Harris Perry's show on Sunday to talk about Jason Collins, his coming out, and why it's so important for athletes to continue doing so:

“In this day and age, a third of teenage suicides are due to their sexual orientations,” Navratilova said. “They’re so terrified of coming out as gay that they take their own life.”

Navratilova mentioned that she came out as AIDS was coming to light, and noted President Reagan’s failure to adequately acknowledge the problem was a part of the culture at the time.