On Friday I reported that there was movement afoot in Minnesota on marriage equality and that bills pending there could see action soon. 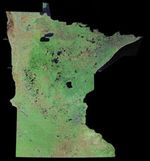 Today, the AP reports that one of those bills will get a last-minute hearing today:

The House Ways and Means Committee is scheduled to review the legislation Monday. That's after a state analysis showed a small impact on Minnesota's general fund.

The analysis by Minnesota's budget office predicts that if gay marriage becomes legal, 114 state employees would enroll in state benefits for their married partners. That would cost the state about $688,000 a year. But it would be partly offset by about $190,000 from same-sex couples buying marriage licenses.