Buzzfeed sat down with Senator Rob Portman (R-OH) at one of its Buzzfeed Brews events during which beer is guzzled. About half of the discussion was devoted to LGBT issues including immigration, ENDA, and his shift on marriage equality. 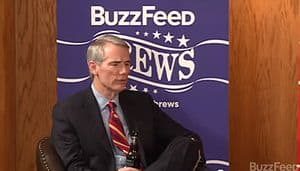 Noting that many areas of federal law address marriage-based benefits, Portman counseled against the creation of a specific category for same-sex couples in immigration law — although he stopped short of saying he would oppose such a measure….

…Portman also expressed general support for LGBT employment protections, saying, "I totally support the concept" of the Employment Non-Discrimination Act, which would bar most employers from discriminating on the basis of sexual orientation or gender identity.

"There oughta be a law in place," he said, expressing two potential concerns with ENDA: "litigation that could result" and "religious freedom."

…Asked about criticism he received when announcing his changed view on marriage equality by those who said it shouldn't have taken learning about his son for him to change on the issue, he initially replied, "Whatever."

Portman then said he hadn't thought about the issue in depth prior to learning about his son, although he said that perhaps he should have done so.

Pick up the conversation as it turns to LGBT issues, AFTER THE JUMP…