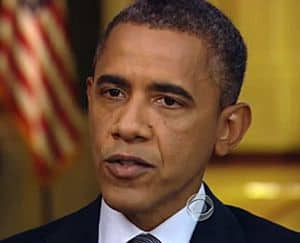 Obama also makes note of the inclusive Violence Against Women Act and his intent to advance equality for LGBT people around the world. It also reaffirms his commitment to an inclusive ENDA and the repeal of DOMA. Advocates have been pushing for Obama to sign an executive order given ENDA's poor legislative chances for passage.

For more than two centuries, our Nation has struggled to
transform the ideals of liberty and equality from founding
promise into lasting reality. Lesbian, gay, bisexual, and
transgender (LGBT) Americans and their allies have been hard at
work on the next great chapter of that history — from the
patrons of The Stonewall Inn who sparked a movement to service
members who can finally be honest about who they love to brave
young people who come out and speak out every day.

This year, we celebrate LGBT Pride Month at a moment of
great hope and progress, recognizing that more needs to be done.
Support for LGBT equality is growing, led by a generation which
understands that, in the words of Dr. Martin Luther King, Jr.,
"injustice anywhere is a threat to justice everywhere." In the
past year, for the first time, voters in multiple States
affirmed marriage equality for same-sex couples. State and
local governments have taken important steps to provide
much-needed protections for transgender Americans.

My Administration is a proud partner in the journey toward
LGBT equality. We extended hate crimes protections to include
attacks based on sexual orientation or gender identity and
repealed "Don't Ask, Don't Tell." We lifted the HIV entry ban
and ensured hospital visitation rights for LGBT patients.
Together, we have investigated and addressed pervasive bullying
faced by LGBT students, prohibited discrimination based on
sexual orientation and gender identity in Federal housing, and
extended benefits for same-sex domestic partners. Earlier this
year, I signed a reauthorization of the Violence Against Women
Act (VAWA) that prohibits discrimination on the basis of sexual
orientation or gender identity in the implementation of any
VAWA-funded program. And because LGBT rights are human rights,
my Administration is implementing the first-ever Federal
strategy to advance equality for LGBT people around the world.

We have witnessed real and lasting change, but our work
is not complete. I continue to support a fully inclusive
Employment Non-Discrimination Act, as well as the Respect for
Marriage Act. My Administration continues to implement the
Affordable Care Act, which beginning in 2014, prohibits insurers
from denying coverage to consumers based on their sexual
orientation or gender identity, as well as the National HIV/AIDS
Strategy, which addresses the disparate impact of the HIV
epidemic among certain LGBT sub-communities. We have a long way
to go, but if we continue on this path together, I am confident too
that one day soon, from coast to coast, all of our young people
will look to the future with the same sense of promise and
possibility. I am confident because I have seen the talent,
passion, and commitment of LGBT advocates and their allies, and
I know that when voices are joined in common purpose, they
cannot be stopped.

NOW, THEREFORE, I, BARACK OBAMA, President of the
United States of America, by virtue of the authority vested
in me by the Constitution and the laws of the United States,
do hereby proclaim June 2013 as Lesbian, Gay, Bisexual, and
Transgender Pride Month. I call upon the people of the
United States to eliminate prejudice everywhere it exists,
and to celebrate the great diversity of the American people.

IN WITNESS WHEREOF, I have hereunto set my hand this
thirty-first day of May, in the year of our Lord
two thousand thirteen, and of the Independence of the
United States of America the two hundred and thirty-seventh.