Don't believe everything you see. Tony Stark is tops this time around.

When last we saw Tony Stark he was eating shawarma in New York City with his fellow superheroes in the stinger of Marvel's The Avengers (reviewed). When we last saw Iron Man, minutes before that, he was plummeting from a cosmic wormhole to his near-death having just saved the world from an alien apocalypse. (S.H.I.E.L.D's workman's comp insurance must be pricey.) I mention Tony Stark and Iron Man separately because the franchise's new writer/director Shane Black, who previously worked with Robert Downey Jr on the underappreciated comedy Kiss Kiss Bang Bang, seems more interested in Stark than Iron Man. This is a good sign, especially for a third picture. Time to flip this tin can around.

IRON MAN 3 takes great pains to make a distinction between the impenetrable suit and the man inside it. Tony Stark's first attempt to suit up is a comic misfire since he's engineered an Iron Man suit that comes right to him when he calls. He hasn't quite worked out the speed of his flying wardrobe -imagine a metal codpiece flying 60 mph right at your Andrew Christians. The second time we see Iron Man, if I'm remembering the sequence of events correctly, Tony Stark isn't in the suit at all. He's engaging in some prankster remote control business for girlfriend Pepper Potts (Gwyneth Paltrow, wonderful in this role but haters gonna hate). 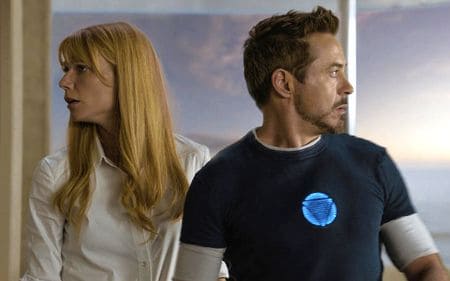 The film even opens with a flashback to Tony's pre-Iron Man days, further separating the man from his iron mask.

More Spoiler-Free Stuff AFTER THE JUMP…

Many years earlier Tony Stark dissed sycophant nerd scientist Aldrich Killian (Guy Pearce) and seduced genius botanist Maya Hansen (Rebecca Hall) making breakthroughs in genetic healing and limb rejuvenation. Stark's actions will come with heavy consequences though we don't yet know how. Stark spells this out for us with the narrated warning that "we create our own demons." It's so emphatically stated that we assume that director and star are writing the theme down with a sharpie for us and underlining it three times.

When Stark mentions his own demons he's not talking about the demon in a bottle. Stark's battle with alcoholism from the comic book has never transferred over to the movies. But at least they've painted Tony Stark as an addictive personality: women, toys, material possessions, adrenaline, and, uh, Pepper Potts. He can't get enough of any of them. His latest addiction is non-stop tinkering with his suit and building multiple variations of the same. There's now an Iron Man for every occasion like Stark is Batman and the suits are merely Utility Belt. The Suit may be better than ever but Stark is falling apart inside it. His near-death in The Avengers has shaken him. Thankfully the man inside the man inside the suit is fully engaged. After what felt like coasting in Iron Man 2 and a little phoning it in with The Avengers (when other stars were around to pick up the slack) Robert Downey Jr seems to have woken up again to the blessing that this role has been to his career.

That's a good thing since he spends most of this third film outside the suit. The first of the film's two gargantuan action setpieces robs him of the armor multiple times and blows it up real good, too. At times IRON MAN 3 plays like an absurd superheroic parody of MacGyver as Tony Stark battles impossibly powerful enemies without his usual protective gear. But fear not, the suit will return, as cavalry, in the last positively insane battle sequence. It's arguably too insane — what the hell is happening? — but it undoubtedly already earned this series its third Oscar nomination for Best Visual Effects. Still and all, the film's repeated abuse of the Iron Man suit, brings us to the movie's true or at least most deftly handled theme: Identity.

In that opening prologue at the science convention while the movie is writing the "we create our own demons!" theme in bold sharpie, this other more playful theme is already in place. It's scrawled right there as a joke on Tony Stark's chest, also with a Sharpie, on his sticky name tag…

"We create our own demons" gets heavy handed and awkward at times — particularly in the first half as The Mandarin (Ben Kingsley) begins to threaten America for its past sins. But the theme of identity is always lighter, funnier, and more skillfully organic to the story. The heroes (Iron Man, his sidekick War Machine, and his girl Pepper) are all struggling to redefine or at least refine their roles. Pepper's stunned reaction to her own actions in the finale is one of the best laughs in movie theaters this year. The film even finds a neat way to sidestep the racist history of The Mandarin villain (an arch-enemy created in the 1960s comics) by letting Ben Kingsley run with this theme as only a skilled character actor could.

Like most noisy visual extravaganzas, some details are already starting to fade but this is great popcorn fun. It's frequent twists and surprises and humor give it something like its own identity in the overly crowded superhero genre. I know what Iron Man 3 is: The best of the trilogy. 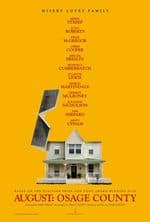 If you're not sick of blockbusters yet (and I hope you aren't or it'll be a long summer for you at the movies), check out the total world domination that Disney plans for 2015.

This week teaser posters were everything. Did you see Lars von Trier's Nymphomaniac parenthesis and August: Osage County open house… there's room for Oscar inside.

Winona Ryder's performances ranked "in order of how much we wanted to be her".