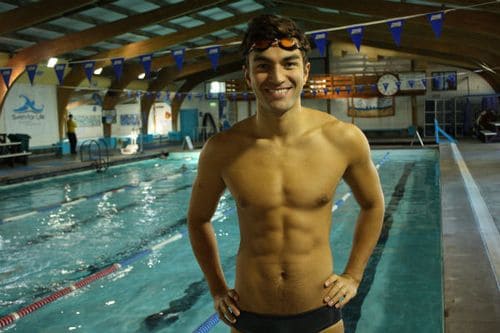 Tongan Olympian, former Texas A&M swim captain, and 2012 Big 12 breaststroke champion Amini Fonua has decided to speak publicly about his sexuality and defend his school from accusations of homophobia in an article in Texas A&M's student paper The Batt:

Fonua, a senior telecommunications and media studies major, said many assume maintaining his identity as an Aggie athlete and a gay man would be difficult and controversial. Yet the Olympian said his story has been a “fairy tale” in terms of what others have experienced and not the trial and battle many perceive it would be.

Fonua said problems tend to arise when one must hide his or her true identity. The Aggie honor code, he said, is not compatible with dishonesty about one’s nature. “An Aggie does not lie, cheat or steal,” Fonua said. “And if you’re living in the closet, you’re living a lie.”

From his personal experiences, he has felt the need to defend the school against accusations of homophobia. Fonua’s openness about his status as perhaps the only openly gay male athlete at A&M comes amid a tumultuous time for the LGBT community, both locally and nationally.

Texas A&M has been in the news over a student bill that would have allowed religion-based discrimination against the campus LGBT center. We wrote about it here.

In light of A&M’s perception as an LGBT-unfriendly campus, Fonua said others will ask him how he functions in what appears to be a hostile environment. But he said these perceptions of Texas A&M as an unfriendly campus are directly contradictory to the positive experiences he has had as a student.

“I think I feel inspired to defend Texas A&M and my experience, especially with the Student Senate [bill],” Fonua said. “I’m kind of sick of having to try to defend my school to other people, because I think it’s a very small minority. Homophobia is at every university, it’s not just A&M. It’s everywhere. It might be a little more prevalent here, but I do think that people will sensationalize how something really is.”