A Texas judge is forcing a lesbian couple apart because he disagrees with their "lifestyle". 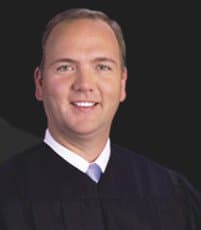 Judge John Roach Jr., a Republican who presides over the 296th District Court, enforced the “morality clause” in Compton’s divorce papers on Tuesday, May 7. Under the clause, someone who has a “dating or intimate relationship” with the person or is not related “by blood or marriage” is not allowed after 9 p.m. when the children are present. Price was given 30 days to move out of the home because the children live with the couple.

Price posted about the judge’s ruling on Facebook last week, writing that the judge placed the clause in the divorce papers because he didn’t like Compton’s “lifestyle.”

“Our children are all happy and well adjusted. By his enforcement, being that we cannot marry in this state, I have been ordered to move out of my home,” Price wrote.

Price also mentions that Compton’s ex-husband rarely sees their two children and was once charged with stalking Compton. She said he also hired a private investigator in order to bring the case before the judge. Court records show the ex-husband, Joshua Compton, was charged with third-degree felony stalking in 2011 but pleaded to a misdemeanor charge of criminal trespassing.

More at The Voice…

Think Progress adds: "Compton can appeal Price’s decision, but her appeal will be heard by the notoriously conservative Texas court system. Ultimately, the question of whether Compton’s relationship with Price is entitled to the same dignity accorded to any other loving couple could rest with the United States Supreme Court."