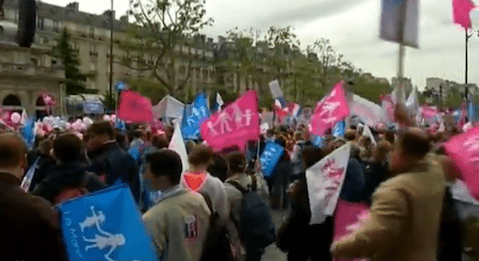 In anticipationof the upcoming wedding ceremonies, tens of thousands of anti-gay marriage protestersrallied in central Paris earlier today. The Guardian reports on the march andthe clashes between demonstrators and riot police:

At least 150,000 protesters convergedon Paris, marshaled by more than 4,500 police who were deployed after thegovernment warned of a risk of violence and disruption.

Riot police evicted about a dozenfar-right activists who used ladders to climb on to the roof of the Socialistparty headquarters and unfurled a banner saying "Hollande resign".

Thenight before the demonstration, 50 people were arrested after chainingthemselves to metal barriers they had placed in the middle of the ChampsElysées and firing smoke canisters. A van carrying masks, banners and smokebombs was seized by police.

The reform hassparked months of bitter political division over the issue. On Tuesday, afar-right historian shot himself at the altar of Notre Dame cathedral afterleaving messages in which he denounced gay marriage.

The marriageequality law, signed by French president FrançoisHollande last week, will go into effect on Wednesday. The move makes France theninth country in Europe and the 14th globally to legalize marriageequality.

Watch a news report on the anti-gay protest, AFTER THE JUMP…