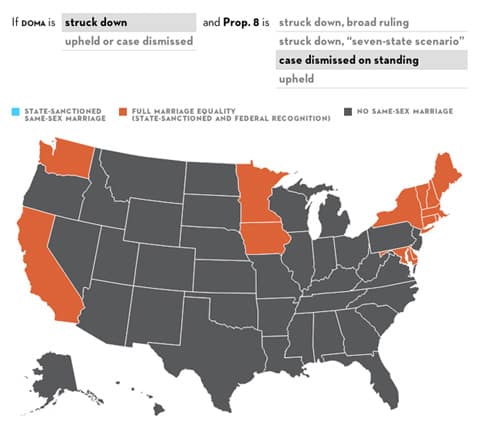 The AP's David Crary looks at the other side of the DOMA coin:

But the court's rulings have no direct effect on the constitutional amendments in 29 states that limit marriage to heterosexual couples. In a handful of politically moderate states such as Oregon, Nevada and Colorado those amendments could be overturned by ballot measures, but that's considered highly unlikely in more conservative states.

With the goal of having another case before the Supreme Court, LGBT advocates say they want same-sex marriage nationwide within five years:

To sway the justices in such a time frame, activists plan a multipronged strategy. In addition to possible ballot measures in a few states, they hope lawmakers will legalize same-sex marriage in states which now offer civil unions to gay couples, notably New Jersey, Illinois and Hawaii.

There also will be advocacy efforts in more conservative states, ranging from expansion of anti-discrimination laws to possible litigation on behalf of sex-couples there who are denied state recognition even though they married legally in some other jurisdiction.

The Supreme Court's decisions "underscore the emergence of two Americas," Griffin said. "In one, LGBT (lesbian, gay, bisexual and transgender) citizens are nearing full equality. In the other, our community lacks even the most basic protections."

(map via The New Yorker)