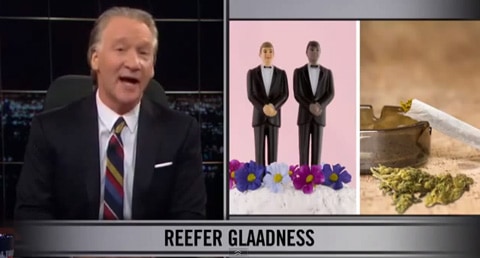 Bill Maher called marijuana legalization a civil rights issue and compared it to gay marriage in his show on Friday night, in a segment that called out Obama for hypocrisy on pot policies.

And finally, New Rule: pot is the new gay marriage. And by that, I mean it's the next obvious civil rights issue that needs to fall.

Now, if I asked you, what has been the biggest change in American society over the past 20 years, what would you say? Instagram? Coconut water? Crocs? All important, but no. It's that a generation ago, the closest thing to gay marriage was Liza Minnelli and David Gest.

In 1988, only 10% of Americans approved of gay marriage. Today, that figure's almost 60%. So what happened? What made gay marriage so normal, so quickly? Now, sure, part of it was Dancing With the Stars. But mostly, it was because gays simply demanded it. They didn't care that gay marriage wasn't popular, they put it on the agenda, and they made it popular. The same way they made every woman in America want to wear giant bug-eyed sunglasses…

…Gay barriers fell when Americans realized gays were their neighbors, their friends, their family members, their co-workers. Certainly, that must also be true of potheads. We all know at least one.

In fact, I bet there is one pothead that you all know. Oh, not any more, but here he is back in high school with his stoner posse, the Choom Gang posing with a cake that I’m guessing didn’t last long. And it makes me curious why he “evolved” so much on gay marriage, but has actually escalated the war on pot. At the Correspondents’ dinner he joked, “I remember when Buzzfeed was something that I did in college around 2 AM,” which killed in the room, but perhaps not so funny to all the young lives ruined for doing the same thing he did back in Honolulu.

Previous Post: « Senator Frank Lautenberg (D-NJ) Dies at 89
Next Post: Robbie Rogers Talks About Being Gay, Coming Out, Returning to Soccer on ‘CBS This Morning’: VIDEO »