The Commission for Human Rights and Minorities in Brazil's lower house of Congress, led by evangelical pastor Marco Feliciano (pictured) of the Social Christian Party, has approved a bill that would lift a prohibition on psychologists to perform gay conversion therapy, the AP reports: 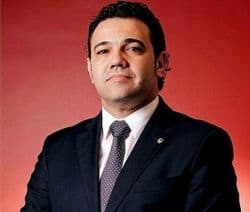 The measure approved Tuesday seeks to lift a prohibition on psychologists treating homosexuality that was established by the Federal Psychology Council. The ban has been in effect since 1999.

"In practice, (the initiative's) result would be that a person over 18 years of age, responsible for his actions, who is homosexual and wants to reorient his sexuality, can be attended by a psychologist," said lawmaker Joao Campos, a member of the evangelical bloc of Brazil's lower house.

Feliciano had tried for weeks to put the "gay cure" initiative before the commission but had failed as opponents maneuvered to block a vote. The initiative was passed Tuesday amid a low turnout by commission members.

The psychologists' council is against the measure , which must pass through other committees. Brazil's first out gay lawmaker Jean Wyllys does not expect it will make it to a full Congressional vote.