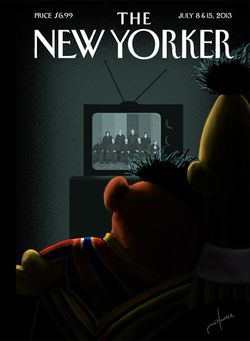 The cover features the two muppets, who according to Sesame Street "have no sexual orientation," cuddling romantically on a couch in a darkened room in front of a TV set picturing the Supreme Court, which of course has just issued a ruling overturning the federal definition of marriage as exclusively the union of one man and one woman.

This is shameless, using figures who are iconic to children to promote sexual deviancy. And worse, it is dangerous and irresponsible.

According to the most extensive research on the subject ever done, Mark Regnerus of the University of Texas concluded that adults who grow up in homosexual households fare worse on 77 of 80 outcomes compared to children raised in an intact biological family…

(cites a laundry list of false and debunked information)

…It is thus clear from the best in social research that being raised in a same-sex environment poses completely unacceptable risks to vulnerable young children.

By promoting same-sex marriage, and using Sesame Street to do it, the New Yorker staff in effect is promoting child abuse. They should be ashamed of themselves.

Meanwhile,  Flavorwire's Tyler Coates is upset about the cover for different reasons:

First of all, the notion that Bert and Ernie are gay lovers is ridiculous, and the propagation of the narrative is a childish statement that says more about the sexually obsessed and slightly homophobic tendencies of our culture. Homophobic? Absolutely: it’s a continuation of the idea that sexuality affects personality as much as it speaks of our obsession with outing the private lives of public individuals — in this case fictional characters that most of us grew up with. “Bert and Ernie are two boys who live together! They must be gay!” In what way is that not some borderline schoolyard obsession with the idea of two dicks touching each other? It isn’t nice when it’s aggressive, and it’s certainly not cute when it’s pushed upon two fictional characters in a supposedly charming attempt to symbolize an entire community’s struggle with acceptance and equality, even if the intentions are lighthearted and fun.

Because here’s the thing: there’s nothing particularly fun about being victimized and marginalized not just by the mainstream community but also within the community to which one belongs. There’s also nothing breezy about having one’s emotions manipulated or infantilized by a national publication whose primary goal is to sell copies of a magazine. You know what kind of image would have been nice to see on The New Yorker cover? Perhaps one of actual gay and lesbian couples. Were the magazine’s designers struggling to find one that anyone might recognize? How about Edith Windsor and Thea Spyer, whose relationship was at the center of the case that determined DOMA was unconstitutional in the first place? Did they need help finding one?

In related news, Gawker notes that the image on the cover, which was submitted via Tumblr, has been around for awhile, though slightly altered for the SCOTUS ruling..

The TV screen has since been modified from a grainy Obama shot to a grainy Supreme Court portrait, as you can see. But otherwise, the design and ("Innocence. Lost.") spirit are the same. 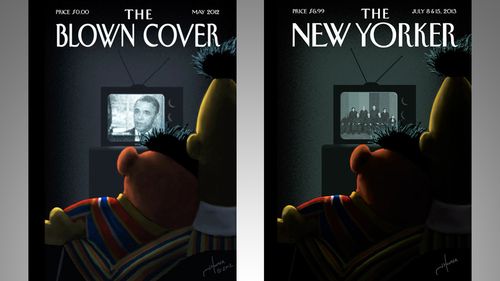