A professor at Columbia State Community College in Columbia, Tennessee has come under fire for an assignment she gave to her psychology class, aimed at creating empathy for gays and lesbians, The Tennessean reports: 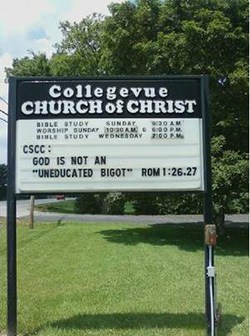 "At issue is an assignment in a class taught this spring by psychology professor Linda Brunton. Students claim they were required to wear a rainbow ribbon and make public statements in support of gay rights. They were then assigned to write a paper about the reactions they got from other people.

Travis Barham, an Alliance Defending Freedom attorney, claimed in a letter to Columbia State that the assignment was illegal.

'Dr.
Brunton’s assignment violates decades (of) clearly established law by
compelling students to support in public views they either do not wish
to advocate or find abhorrent,' Barham wrote."

While there appear to be conflicting reports as to whether the assignment was mandatory, at least one student, Jeff Vernon, who took a class taught by Brunton two years ago, recalls a similar assignment that was voluntary and offered for extra credit. Vernon, who did not participate, told The Tennessean,

“It did not affect my grade. It did make for an uncomfortable situation.”

The assignment, entitled "“Promoting Increased Understanding of Sexual Diversity through Experience Learning," also caused controversy in the local community, drawing the ire of nearby Collegevue Church of Christ and its minister, Greg Gwin.  Of particular offense to Gwin and the students who filed the complaint is the claim allegedly leveled by Brunton that those who oppose gay rights are, "uneducated bigots”:

"On Wednesday, the church changed its sign to read, 'CSCC [Columbia State Community College]: God is not an ‘Uneducated Bigot’ Rom 1:26,27.'

'I am increasingly disgusted by the intolerance of those who claim to promote tolerance,' Gwin said."

In a statement issued to the AP, College officials stated that they have begun an investigation into the matter.

(photo via The Tennessean)