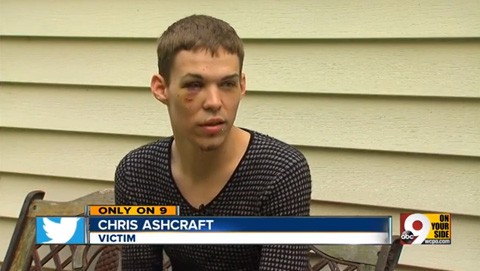 Outlook Columbus reports that three gay men have been attacked in Columbus, Ohio over the past five days:

On Thursday, a visitor from out of town who was smoking outside the Southbend Tavern in Merion Village was punched and kicked until he was unconscious by at least two men who had asked him for help starting their car.

Late Sunday, an employee walking home from Union was beaten near Summit Street in Italian Village. A gay man also was attacked and robbed early Monday near E Broad Street and Parsons Avenue in Olde Towne; he posted a photo of his bloodied head, along with a warning: “It sounds like hate crimes are back, boys and girls.”

“There are creeps out there, and they don’t like us,” said Gloria McCauley, executive director of BRAVO, the Buckeye Region Anti-Violence Organization.

Sgt. Richard Weiner, a spokesman for Columbus Police, said Southbend patrons reported the incident there late last week. Christopher Ashcraft told officers he was approached by several men who asked for a jump-start…

…David Conley, the victim of the third attack, said he called 911 as a group of men approached him from behind, and he was on the phone with the dispatcher as they hit him with a 2-by-4. Police arrived quickly and arrested three men. Conley said the men made vulgar comments as they approached that indicated an anti-gay bias.

Exile, a gay bar, was also robbed this week.

Watch Ashcraft tell his story to WCPO, AFTER THE JUMP…