France's anti-gay marriage activists are not giving up. They have announced they will be targeting the Tour de France to get their message across, The Local reports:

"From June 29th to July 21st, we will have an incredible global visibility  to show our fight against the law," read a statement on a new Facebook page created to inspire protesters to line the 3,360-kilometre route.

And while the first stage of the race will get rolling on the island of Corsica, the remaining 20 stages will cover well near every corner of mainland France, offering protestors across the country the chance to snatch a bit of prime-time coverage.

Their Facebook page implored would-be demonstrators to send private messages with points on the route they would consider protesting at, giving the impression that the 'Tour Pour Tous' (Tour for all) will try to organize as wide a coverage of the famous event as possible.

The page also launched the hashtag #tourpourtous to prompt users on the social media site Twitter to rally to the protesters' defence. By Wednesday, proponents and opponents alike had begun using the keyword to trade jibes.

Anti-gay activists have already targeted the French Open with a flaming protester. 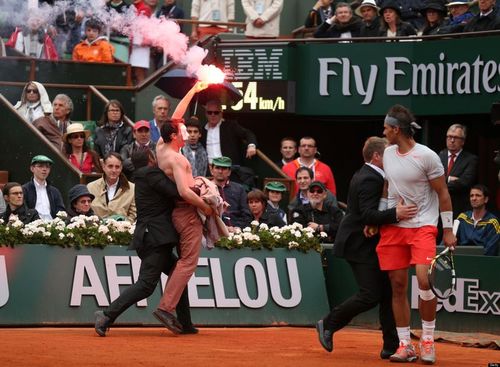