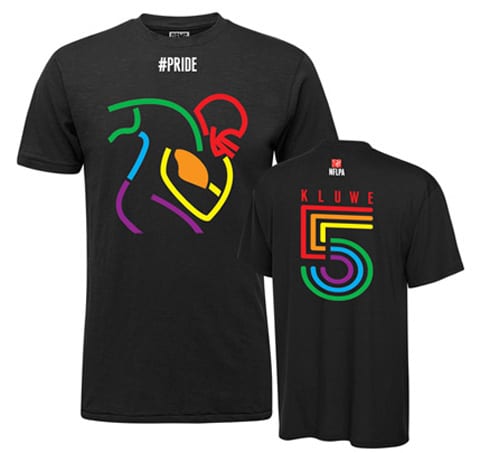 The NFL Players Association has launched a line of 'LGBT Pride' t-shirts to benefit (all proceeds) the anti-homophobia group Athlete Ally. Supporters have the option of adding the jersey number and name of Brendon Ayanbadejo, Connor Barwin, Scott Fujita, Steve Gleason, Chris Gocong, Chris Kluwe, Donte' Stallworth, Terrell Suggs or Eric Winston to the shirts, which sell for $24.99.

Said Oakland Raiders punter Chris Kluwe: “I am extremely proud to be a part of this collaboration between Athlete Ally and the NFLPA’s One Team Shop to raise awareness both of Pride month and the issue of tolerance and respect within the NFL itself. As players, we are role models to a wide variety of people, and this is a great way to send a message of empathy to those who love and watch the game. Also, I'm pretty stoked that people can buy something with my number on it.”