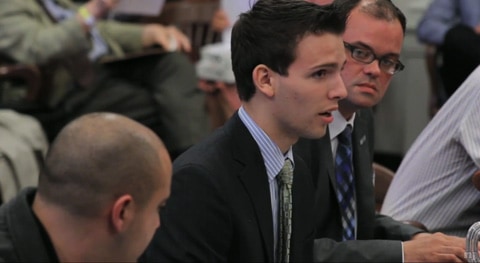 Yesterday, the New Jersey Assembly Women and Children's Committee advanced a bill that would ban gay conversion therapy for minors, the Star-Ledger reports:

Testimony from dueling mental health professionals and activists dominated the 2-1/2 hour hearing at the Statehouse, with proponents arguing the treatment has been discredited as ineffective and harmful to kids, and opponents insisting the bill tramples parental rights.

Before the hearing ended, John Tomicki of the League of American Families, called the bill unconstitutional, vowing "if we have to, we will bring a legal challenge."

The committee voted 5-0, with one abstention to approve the bill (A3371 ), sponsored by Assemblyman Tim Eustace (D-Bergen). It now moves to the full Assembly for a vote. The Senate Health, Human Services and Senior Citizens Committee approved an identical bill in March.

Watch moments from the hearing in which gay teen Jacob Rudolph and Christopher Doyle, a man who claims to be "ex-gay", speak at the hearing, AFTER THE JUMP…