National Organization for Marriage President Brian Brown is unhinged over the Supreme Court rulings on marriage: 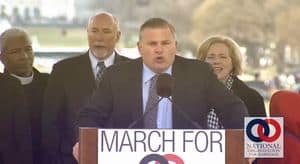 "In a miscarriage of justice the US Supreme Court has refused to consider the decision of a single federal court judge to overturn the perfectly legal action of over 7 million California voters who passed Proposition 8 defining marriage as the union of one man and one woman," said Brain Brown, NOM's president. "The Supreme Court's holding that proponents of an initiative had no legal right to appeal ignores California law and rewards corrupt politicians for abandoning their duty to defend traditional marriage laws. It's imperative that Congress continue to preserve the right of states to protect true marriage and refuse to recognize faux marriages performed in other states or countries."

"There is a stench coming from this case that has now stained the Supreme Court. They've allowed corrupt politicians and judges to betray the voters, rewarding them for their betrayal. It's an illegitimate decision. We and millions of other Americans will refuse to accept this rogue decision rewarding corruption. " Brown said.

"We also urge Congress to reject the inevitable attempts to dismantle remaining elements of DOMA, including the right of states to refuse to recognize so-called gay marriages performed elsewhere. The vast majority of American voters have expressed with their votes their desire to maintain marriage as the union of one man and one woman. That decision should be respected and left undisturbed."

"The only other saving grace of the Supreme Court's decisions today is that they refused to go along with the urgings of Ted Olsen and David Boies to find a constitutional right to same-sex ‘marriage,'" Brown said. "The plaintiffs failed in their primary objective, which is a major victory for those defending Proposition 8, especially Chuck Cooper and his firm, along with the attorneys at the Alliance Defending Freedom, and Andy Pugno of the Prop 8 Legal Defense Fund."