Daniel Baer has been nominated by President Obama to become the ambassador of the Organization for Security and Cooperation in Europe (OSCE.), the Washington Blade reports: 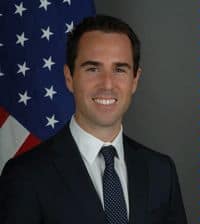 OSCE, which is based in Vienna, comprises 57 European, Asian and North American countries that cooperate on security, terrorism, economic and human rights issues. The organization formed in the 1970s during the Cold War.

Baer, who has been in his current position since Nov. 2009, was previously an assistant professor at Georgetown University’s McDonough School of Business. He was a fellow Harvard University’s Edmond J. Safra Foundation Center for Ethics from 2007-2008 and worked at the Boston Consulting Group from 2004-2007.

Previous Post: « Ban This Woman From Dunkin’ Donuts Forever: VIDEO
Next Post: George Takei Explains How Most Things in Nature are Gay: VIDEO »