The percentage of Americans who believe same-sex marriage is "inevitable" has increased by 13% since 2004, a new Pew Research poll shows: 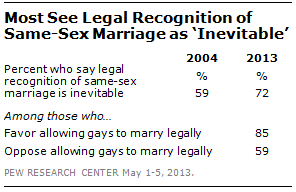 As support for gay marriage continues to increase, nearly three-quarters of Americans – 72% – say that legal recognition of same-sex marriage is “inevitable.” This includes 85% of gay marriage supporters, as well as 59% of its opponents.

The national survey by the Pew Research Center, conducted May 1-5 among 1,504 adults, finds that support for same-sex marriage continues to grow: For the first time in Pew Research Center polling, just over half (51%) of Americans favor allowing gays and lesbians to marry legally. Yet the issue remains divisive, with 42% saying they oppose legalizing gay marriage. Opposition to gay marriage – and to societal acceptance of homosexuality more generally – is rooted in religious attitudes, such as the belief that engaging in homosexual behavior is a sin.

In related news, a new Gallup poll concerning the moral attitudes of older Americans shows a dramatic shift in acceptance from the 55 and older population:

Acceptance of gay or lesbian relations among Americans aged 55 and older is now 25 points higher than it was in 2001. While Americans between the ages of 18 and 34 have consistently reported support for gay and lesbian relations at higher levels than older age groups, their support has also risen by 22 points in the past 12 years. 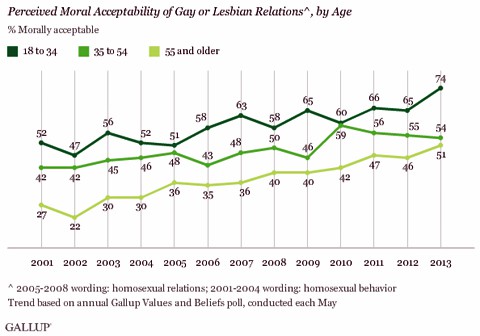